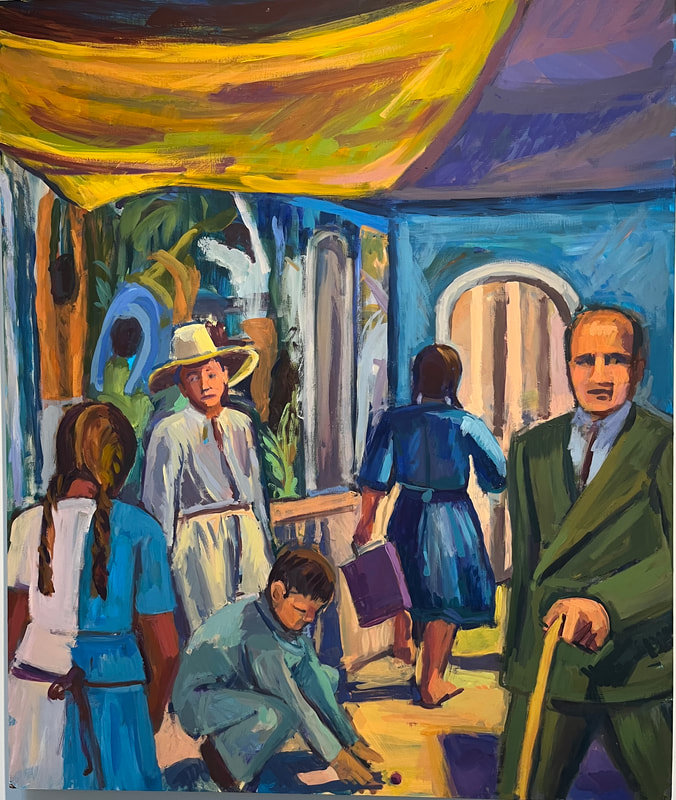 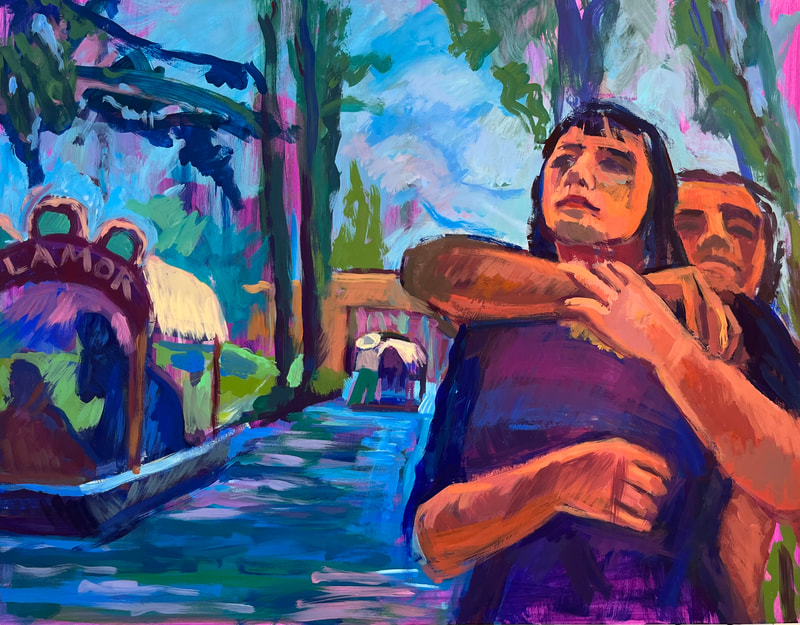 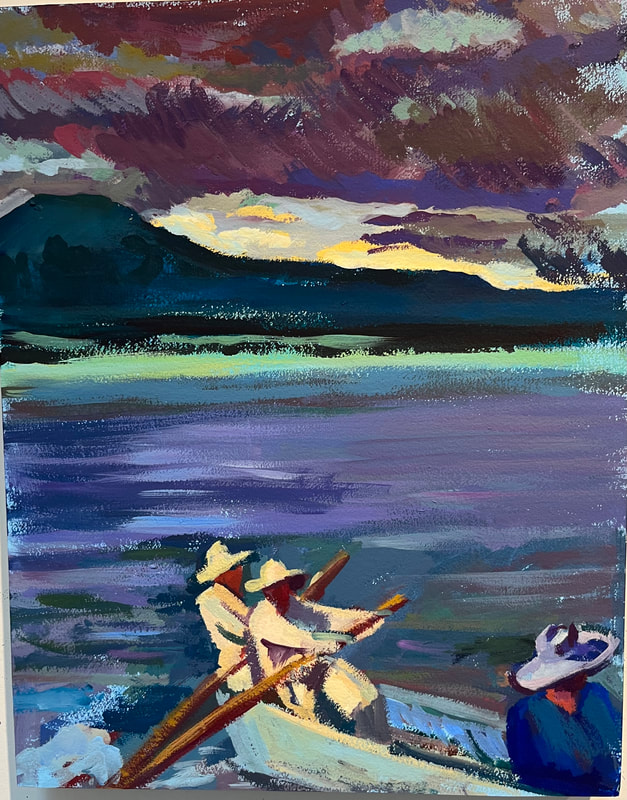 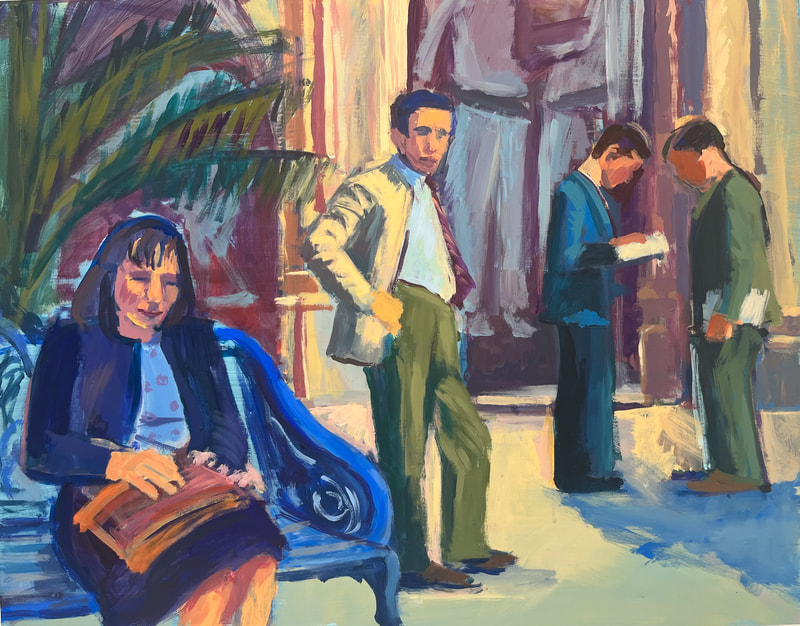 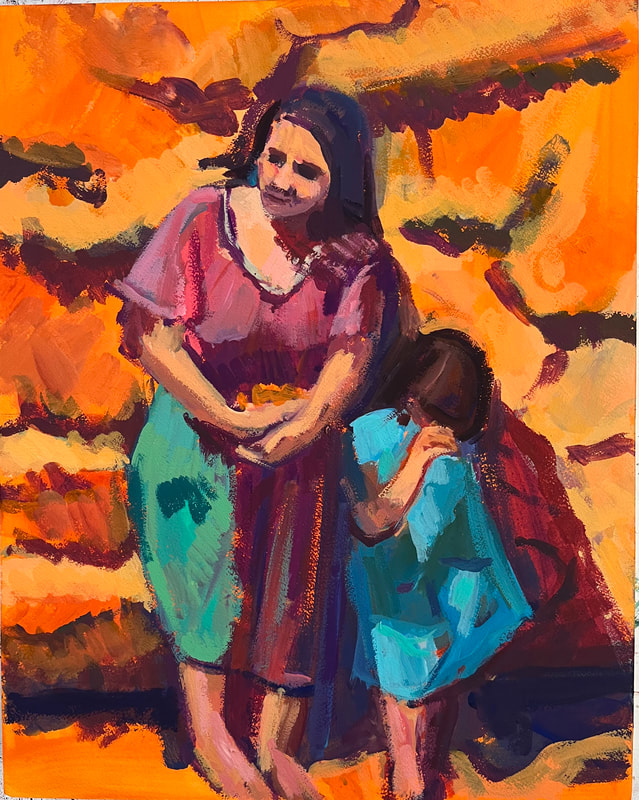 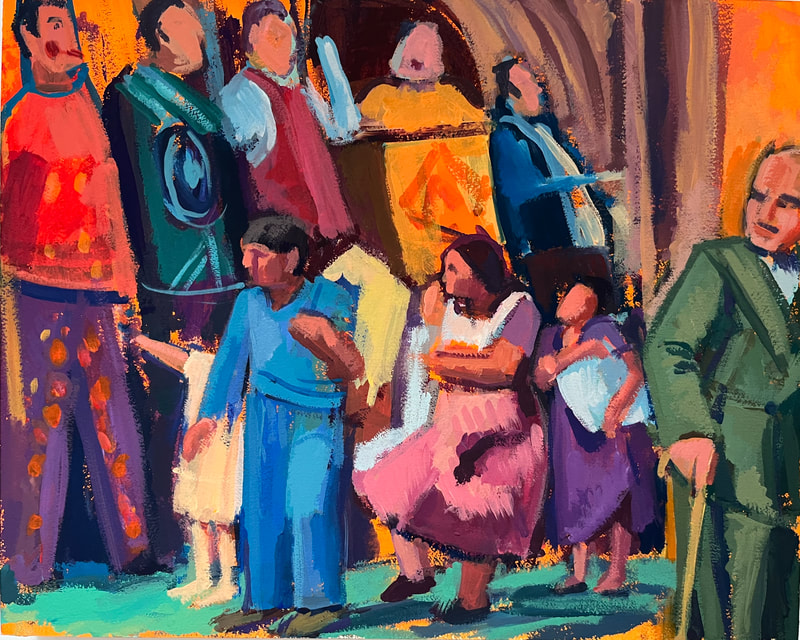 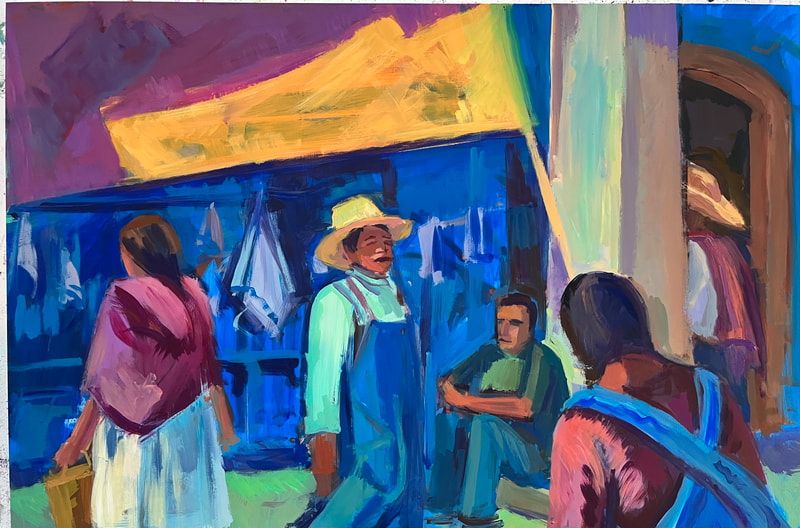 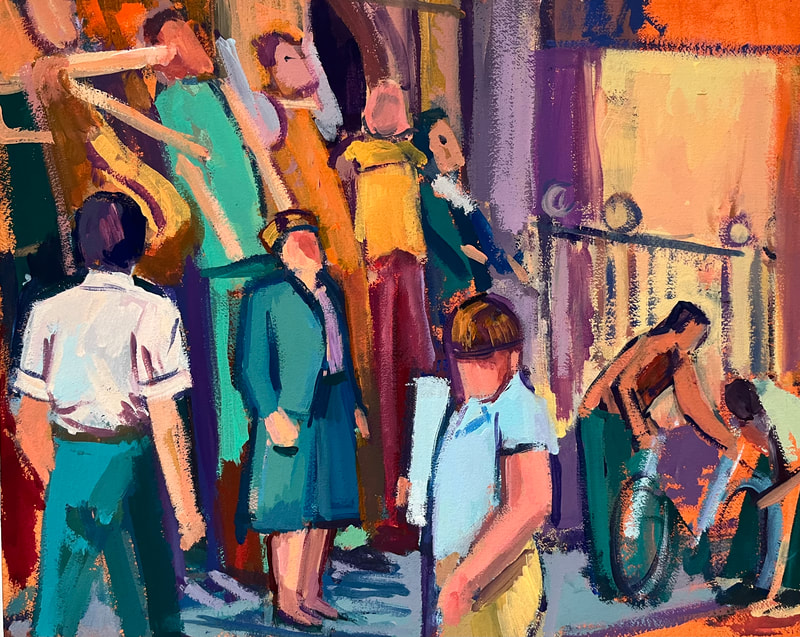 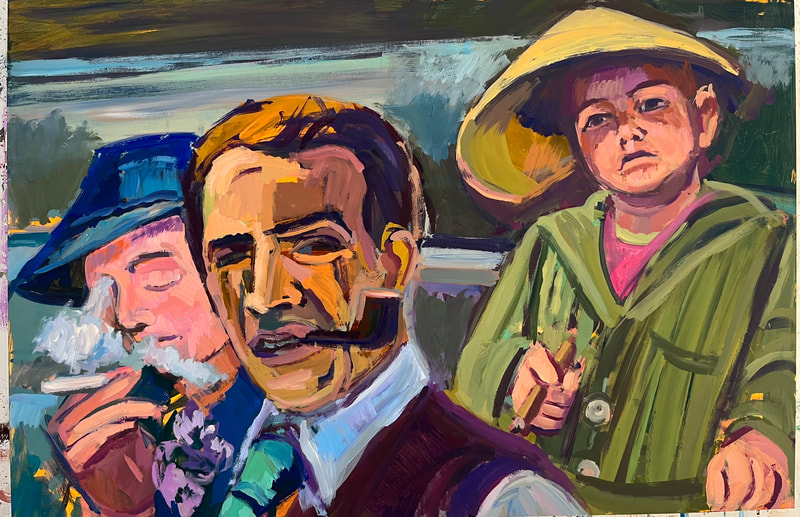 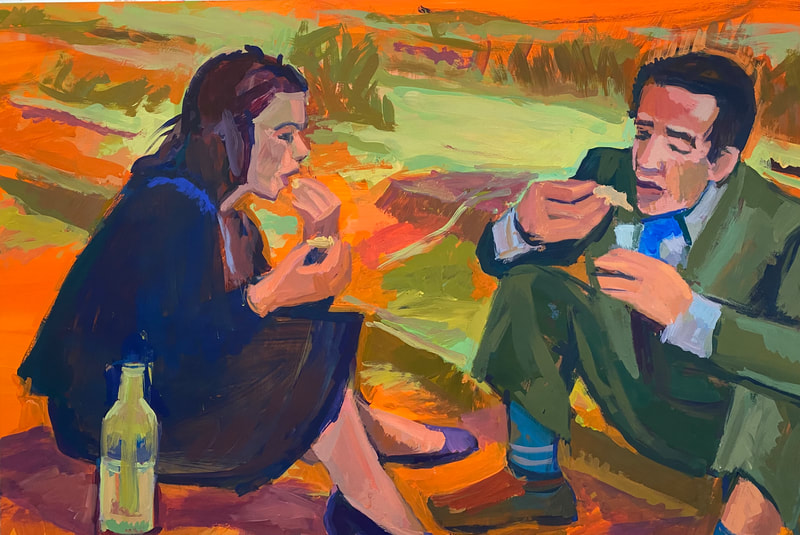 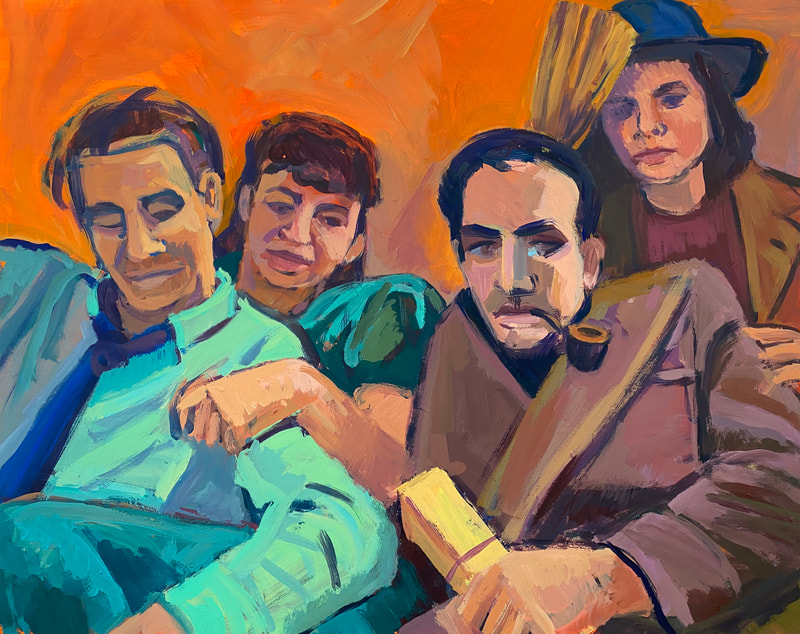 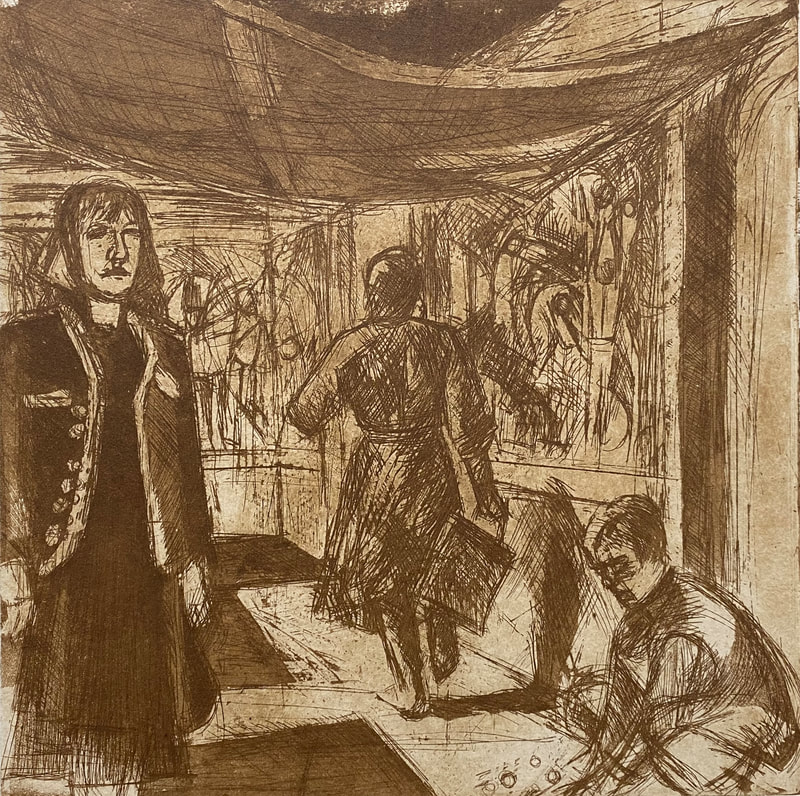 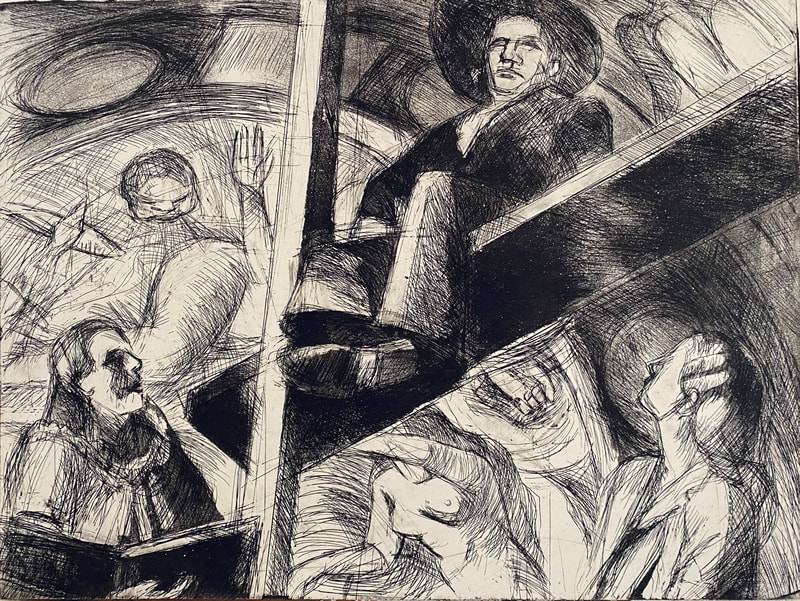 MURALS IN THE MARKETPLACE

The negatives from my father’s trip to Mexico in 1939 survived his WWII service as a War Artist, my parents’ early married life in New York City, the move to Boston, and spent sixty-two years unnoticed in our family home in Newton, MA. My sister Judith, upon my questioning their whereabouts, discovered the negatives tucked away in a corner of the third floor in 2019.  Once scanned, their clarity and content provided the inspiration for the paintings and intaglio prints in Murals in the Marketplace.

I grew up knowing the story of the trip, the two Chicagoans, Julio De Diego and my father, Mitchell Siporin set off for Mexico in an old jalopy to join in a pilgrimage with Depression era Federal Arts Project muralists, contemporary Mexican artists, and their companions, to witness the great 1920’s Mexican murals that inspired and informed their WPA murals. However, there are very few images of the group viewing the Mexican Murals. Instead, the pilgrims are seen picnicking, falling in love, spectating at bullfights, walking on streets by displays of huge puppets, observing ancient archaeological sites, or overlooking grand vistas. I recognize some of the travelers, Edward and Norma Millman, (Mitchell Siporin, Edward Millman completed, the Treasury Department's funded St Louis Post Office murals in 1941), Spanish artist, Julio de Diego, and Carlos Merida, Guatemalan/ Mexican artist. However, there are several of the group who have starring roles that I cannot identify; in particular, Julio De Diego’s girlfriend, whose poise, mystery and Mona Lisa smile, acted as my muse throughout this two -year artistic journey.

My father, behind the camera, does not appear in most of the images.  I composed the paintings and etchings in Murals in the Marketplace imagining the world through my father’s eyes. The appearance of Diego Rivera in the Marketplace, with fragments of his murals painted on market walls, are my own invention, an imagining of my father’s inspiration, which, as he always told me, were the Mexican Muralists, not Picasso.

My process begins with sketchbook ink drawings and multiple state etchings and aquatints. As I juxtapose figures, architecture, and landscape, the narrative emerges. Bystanders, incidental tiny actors in the distance, discovered through enlarging the photographs’ sections, shape the narrative. Sometimes I feel I am a novelist, watching my characters interact and directing the drama as it unfolds. I begin the paintings as I always have, with a bold brush, blocking in the space, positioning the figures, moving things around. As the painting develops, my pace changes; I focus more on representation.

I have painted in water-soluble, vinyl Flashe paint for over twenty years, attracted by the quality and range of color.  Its matte, gouache-like appearance belies its tough and permanent quality, as it was first used by 1950’s sign painters. The choice of the colored ground on each panel is essential, as it provides the foundation that governs the color choices in the individual works. In the painting LAMOR, the magenta ground permeates while peeking out behind clouds, in the female figure’s clothing, or applied over the blue green water. The color is keyed to the magenta—the warm shade of green and intense ultramarine and deep cerulean sing harmony to the magenta ground. In Night Passage, the alizarin, purple and warm greys in the sky, and the viridian mountain and pistachio water’s edge interact with the ground’s shade of blue to create the evening light.
​
©2022 Rachel Siporin